SWOT Analysis Of Nike analyzes, Nike, Inc. is an American multinational corporation. Nike is headquartered in Beaverton, Oregon, USA. It was found by Bill Bowerman and Phil Knight in the year 1964. The company specializes in athletic wear, providing footwear, apparel, athletic equipment, and accessories. Nike SWOT Analysis can teach us a lot about Nike Business Model and other factors.

Nike Swoosh logo was in the style of Nike’s inspiration from a Greek goddess who symbolizes victory.

Nike’s primary goal is to supply athletes with exceptional products and wearable that aids them in better sports performance. However, due to the success, Nike has gotten the company now provides athleisure wear as well. Currently, Mark Parker is the CEO of Nike.

This can only be achieved through a firm with extensive knowledge, experience and innovative strategies. To determine the strengths of the company potential, weaknesses, opportunities and threats, it is necessary to conduct an SWOT analysis by Nike. 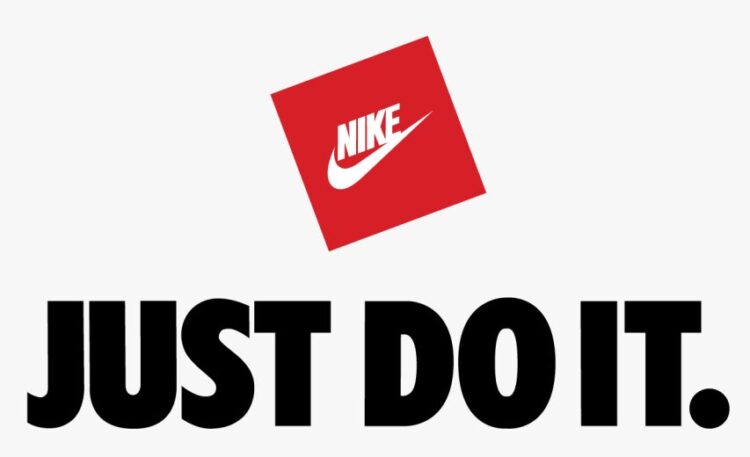 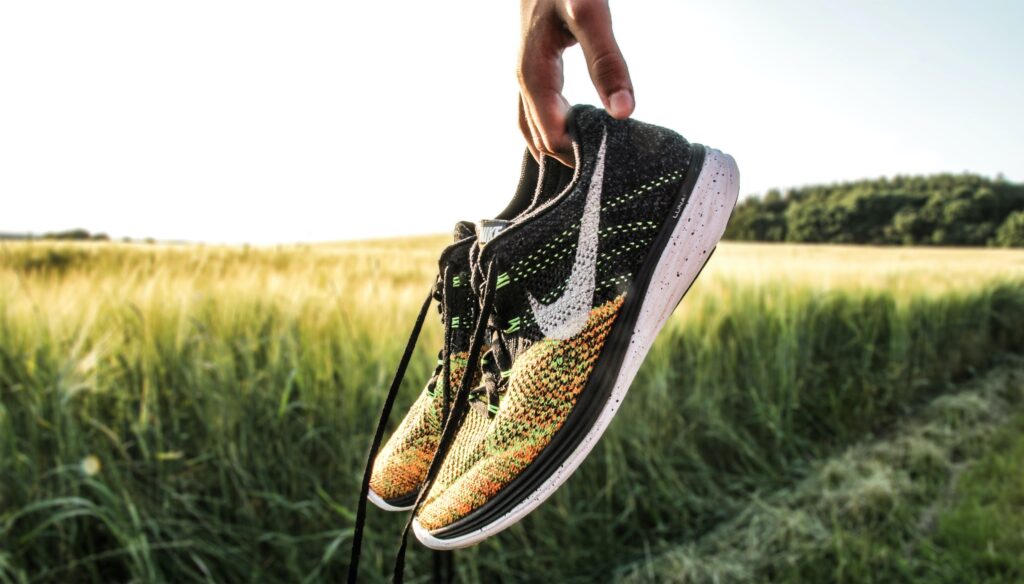 1. Strong brand awareness: The brand Nike is among the most well-known brands around the globe because its name is memorable, simple to pronounce, and distinctive. The swoosh logo is easily recognized by all. Nike has taken over approx. 31% of the world’s market for athletic footwear.

2. Large customer base: Huge Customer base Nike boasts millions of customers all over the world who follow Nike’s fashions, take part in Nike occasions, and give feedback to customers. Due to its massive number of customers, the company’s market capitalization has increased up to the sum of $224 billion in February 2023.

5. Side Brands: Nike’s ability to sustain and develop its brands that are associated with it, such as Hurley and converse has allowed it to achieve unparalleled growth for years.

6. Low Cost of Production: The majority of Nike’s footwear is made in other countries. In the fiscal year of 2020, Vietnam produced 50%, China produced 22% and Indonesia made 24% of Nike’s footwear. Other operations include Argentina, Brazil, India, Italy, and Mexico.

7. Internal Professionals: In-house Professionals Nike has a group of professional designers who create the shoes as well as other athletic accessories. Nike believes that its company has been successful thanks to the meticulous research conducted for every item.

1. Poor Working Conditions in foreign Countries: Poor Labor Conditions in Foreign Countries In the past two decades, Nike was repeatedly criticized for its low labor standards. These include forced work and child labor, as well as low wages, and gruesome working conditions that were considered ” unsafe”.

2. Retailers have a stronger hold: Nike’s retail business creates Nike vulnerable because of its sensitivity to pricing. 60% of Nike products are sold directly to retailers or wholesalers. Retailers are their primary customer base, Nike does not put on any sort of defense against their pricing structure at all.

3. Pending Debts: While Nike’s income reports show to be robust but a quick glance at their balance sheet may provide a different view. Nike faces challenges in the financial realm. As of August 2020,Nike’s total long-term debt total was $9.54 billion

4. Dependence of US Market: Even after being established internationally, Nike still relies on the U.S Market for revenues and sales. In the fiscal year of 2020 roughly 41% of the sales were from the U.S and the remaining of 59% was sourced globally. Although it is famous, Nike depends on the U.S for significant growth and sales.

5. Insufficient Diversification: Nike’s dependence on sportswear or the lack of diversification is a major flaw. The pandemic has slowed physical contact and gatherings and has led to sports events cancelled or delayed. Many sports teams are in danger of falling. If the situation deters sports events for a longer period the loss for Nike could be devastating.

6. Different Strategies: Nike pledged to change all of its facilities to renewable energy 100% of the time that emits zero carbon emissions as part of the ” Move to Zero” program. Although the plan is admirable and well-received but it is in contradiction to Nike’s policy which encourages innovation over sustainability. It gives the impression that Nike isn’t committed to combating climate change, and that its commitment is an advertising stunt.

7. Sexual Harassment: Female employees who were former noted they experienced sexual harassment as well. other misconduct was a common occurrence within the company. The New York Times conducted interviews with 50 former and current Nike employees to study the company’s culture. Through these interview, it became revealed that Nike had an unhealthy working environment which was rife with sexual harassment. A number of female employees said that they complained to HR, but were told that no action taken on their side. They were in a state of shock and were afraid to return to they worked at Nike. Many even quit their job. The whole scandal has had a significant impact on the image of the company. 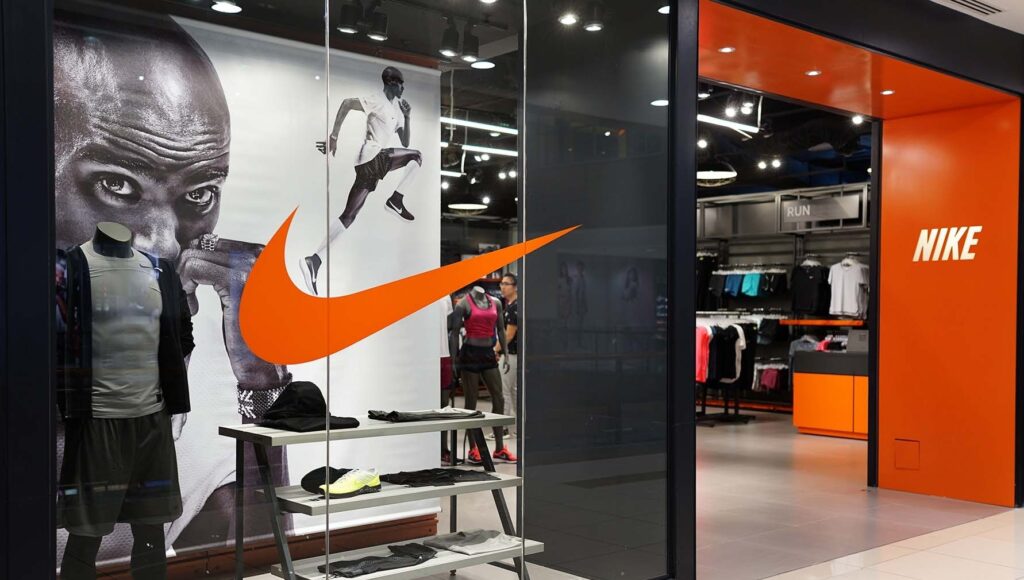 1. Emerging Markets :Although Nike already has an presence in a variety of different countries, there are plenty of potential for Nike. This is due to the fact that the emerging market such as India, China, and Brazil are gaining momentum.

2. Innovative Products: Although Nike has created a variety of products, there’s lots to invent. Nike has expanded its technological reach that is connected to the health and fitness. The products, such as the wearable tech that monitors your physical activity is the initial step towards building new technology products. The integration of technology with sportswear can be beneficial since it’s an aspect of fashion that isn’t studied extensively.

3. Effective Integration :The production and distribution of Nike’s merchandise are dependent on manufacturers who are independent. Nike can choose to acquire some of them or develop its own to ensure an efficient and efficient supply chain.

4. cutting ties with major retailer: Nike has decided to end ties with a few of the largest multi-brand retailers as well as wholesale partners. The report states that Nike has decided to no longer deal with wholesalers like Zapoo’s, Dillard’s, Fred Meyer, Bob’s Stores, etc. The move is aimed at improved product positioning and a better customer service.

5. Acquisition of Artificial Intelligence Startup: It has huge finances, Nike can acquire small or medium-sized businesses or start-ups. It recently bought the predictive analytics platform Cellect to increase its capabilities for online sales and anticipate customer’s buying habits.

6. The Consumer Direct Strategy: Nike has intensified its consumer-direct strategy that means it is shifting its focus towards digital business and then shuttering physical locations. In the fiscal year of 2020 35percent of the Nike brand’s revenue is derived via online transactions. It is evident that the epidemic has shaped the way Nike engages its clients.

1. Counterfeit Products: Counterfeit products can seriously impact the earnings and image of Nike. The company is globally based and the danger of counterfeit goods has increased. Many retailers and merchandisers offer counterfeit Nike products for sale at lower costs. The products at a lower price are constructed with inferior materials but carry the Nike brand name. This could harm the image of Nike because customers may believe that Nike has begun to produce poor quality products.

2. More competition: While Nike is dominating the sports industry however, competition and emerging brands pose threat to the business. With a higher ratio of competition, Nike has to spend more in advertising and marketing. Nike has spent $3.5 Billion specifically on demand generation and marketing in fiscal year 2020. To outdo competitors, Nike’s safest bet is to develop unique products that are designed to the requirements of athletes.

3. Market Budget Stress: Companies such as Under Armour and Adidas are investing more money in advertising and marketing campaigns, which is putting tension on Nike.

4. Risks of Foreign Exchange for Currency: The risk of currency foreign exchange is Since Nike is a global brand and globally, it is impacted by fluctuations in rates of exchange. Nike publishes its financial results as U.S dollars. This has an impact on its revenue since it is the U.S dollar is subject to fluctuation against other currencies.

5. Patent Disputes: Regardless whether a firm is right or wrong patent disputes are hotly and ferociously contested within the open public realm. They also reveal some dirt on both sides of the battle. Nike and Adidas are involved in intense patent dispute regarding the Fly knit and Prime knit shoe in U.S. and German courts.

6. economic Uncertainty: No matter the sector, all businesses are at risk of the negative consequences of the global economic downturn. In the past, Nike has registered a 38% drop on sales in the second quarter of 2020. It could decline even more when the recession is as hard as forecasted by experts.

7. Conflicts in Trade: Nike relies on different markets around the globe as evidenced by the recent rise in its stock prices, which was fueled due to an rise in sales in China. With China as well as the US as the two largest markets for Nike the bulk of Nike’s sales could be at risk if tensions in trade among the giants get worse.

This is our SWOT report that Nike has done. Please let us know if you have additional suggestions to add. 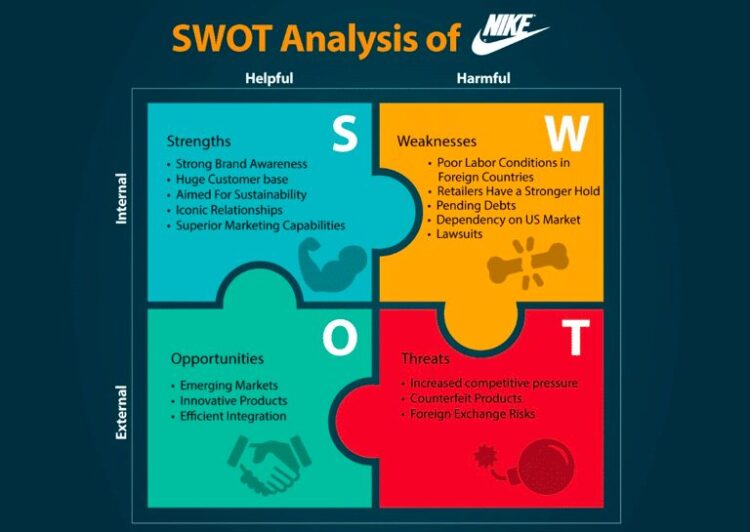