1. Highly secure phone: The primary RIM’s advantage in the market is its safe mobile phones. The company launched its phones with a secure encrypted network that allows sending messages between phones with no risk of theft. This was later one of the USP (unique selling point) for Blackberries and was an appealing feature for corporations as well as governments that other phones did not have. In the end, BlackBerry became the no.1 option for companies and government agencies.

2. A strong focus on a narrow segment of customers: Unlike other mobile phone and smartphone companies, BlackBerry tries to appeal to a small segment of consumers which includes corporations and government. This leads to an approach that is more targeted to satisfy the demands of this specific segment, something other companies rarely accomplish.

1. Inability to promote this branding: BlackBerry’s brand was popular in the marketplace long before the Apple iPhone debut or the Samsung Galaxy success. In the year that the iPhone was released, RIM had a better quality BlackBerry phone on the market, and enjoyed greater numbers of sales and had a more reputable brand however, it was unable to grow on this due to its weak marketing efforts. The company continues to invest significantly less amount ($41.3 million) in marketing, which is about 10 times less that Apple ($400 millions) and eight times less that Samsung ($334 millions) during 2012 as per CNET. With better-quality products however, the company will not be able be able to “sell” them to consumers since it would be eclipsed by Apple’s and Samsung’s marketing budgets.

The inability to market the brand has also led to the brand’s reputation deteriorating and there was a decrease in customer satisfaction. According to Interbrand the brand of BlackBerry was among the brands that suffered the most in 2012, out of the top 100 global brands. It was less valued than Samsung’s, Apple’s and Nokia’s brands. The decline in brand value is a sign of a declining popularity among consumers as well as less sales.

2. BlackBerry OS: BlackBerry tablets and phones are powered by RIM’s proprietary OS. While in the case of Apple, this has provided some advantages in the market, BlackBerry experiences different effects. For one, BlackBerry customers are not enough to make a profit for large application developers. Insufficient apps available in store discourages users from buying tablets or phones. The company is also lacking enough funds and coordination to build its OS effectively. The company is already suffering from the old Version of OS on its phones and numerous delays in the new OS launch.

4. A poor performance within the marketplace for tablet devices: RIM’s BlackBerry Playbook tablet failed to get into the tablet market. The tablet only snagged a small market share, leading to costs for the business. A lack of performance in the tablet market reduces chances for the company to compete against Apple or Samsung who have substantial income and growth in profits due to the sales of tablets. 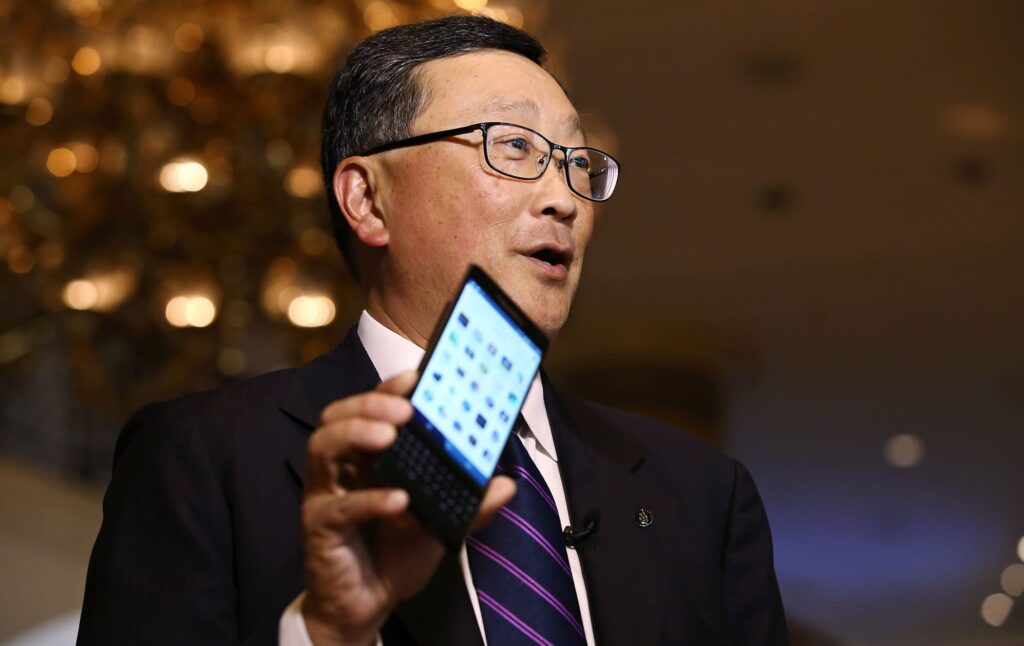 1. Growing the smartphone and tablet markets: Tablet market is predicted to expand by 50% per year between 2011 and 2015. According to estimates the market will be worth $100 billion at the end of 2015. BlackBerry is a fantastic opportunity to improve its position in this rapidly expanding market and to gain more market share.

4. Acquiring patents through acquisitions: The key competitive advantage in the technology industry is a an extensive patent portfolio. Patents can be found by investing in expensive R&D or by acquiring other companies, which is the most effective option for BlackBerry today.

1. Rapid technological advancement: One of the most significant dangers BlackBerry and other tech companies are confronted with is the rapid change in technology. Businesses are under pressure to launch new products at a faster pace. One that isn’t able to keep up with its competitors eventually will fail. This is particularly true when an organization would like to release something brand unique, innovative, and profitable. RIM has faced this kind of threat several times , when it was unable to release its latest BlackBerry OS on time and when it released its Playbook tablet to market.

2. Smartphone markets are saturated in countries with developed economies: Smartphones market in the advanced economies are overcrowded and has a slow growth rate. This hinders BlackBerry’s ability grow its market share in US as well as Canada.

3. A rise in the competition in government contracting: Government renews its contracts with suppliers every couple of years, and BlackBerry is competing with formidable competitors like Samsung and Apple in contract renewal. While BlackBerry has an edge over its competitors by offering high-security mobile phones, it also has to compete in other features on phones (at which the company is competing in a poor way) and also. BlackBerry has been beaten by Samsung in renewing a few of US government contracts in the last year. 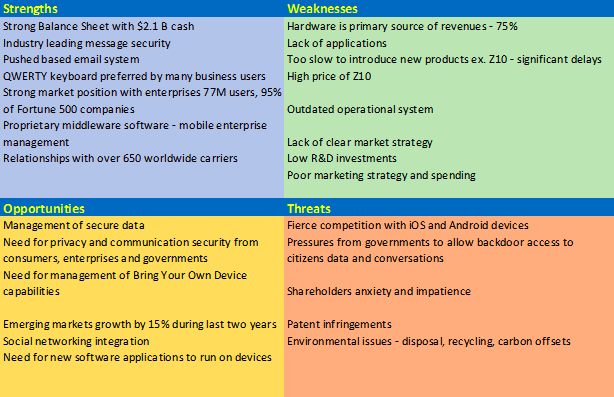 This is the SWOT report that BlackBerry has done. Please let us know if you have additional suggestions to add.